Revenge Comes Calling and Isle of Deceit by R.J. Rosatte

Two episodes this week! On Tuesday's episode (102) of the GSMC Book Review Podcast I interviewed J.D. Sanderson about his debut novel, A Footstep Echo. On today's episode (103) I was happy to welcome R.J. Rosatte back to the podcast to talk about his two follow-up Katie and Malone novellas. If you recall, R.J.'s first interview was in April as part of the collection of authors who wrote novellas for the Tawnee Mountain Mystery series. In his contribution, Dark Side of the Mountain, we were introduced to Katie Douglas and Casey Malone. Katie and Casey survived the adventures they encountered in that story, but little did they know that was only the beginning. 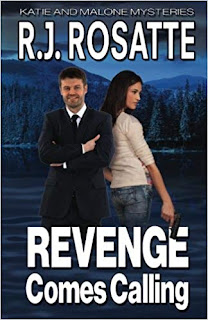 Katie Douglas and Casey Malone first met at the Tawnee Mountain Resort, she an inspecting engineer, he a relaxing mystery novelist. Together they discovered a kidnapping plot on the mountain. As they tried to unravel the mystery, they uncovered a plot to bomb the high society wedding of the Wittenaur family being held at the resort. An imprisoned Mafia Don vowed revenge on Robert Wittenaur, the former DA that sent him to prison for life and had set in motion the plot to murder the entire family and guests at the wedding. After thwarting both of these plots in an explosive climax to the story, Katie and Casey went their separate ways, promising to get together again.
Now, Katie is on her way to spend what she hopes will be a romantic weekend at Casey’s mountain-top retreat in Virginia. Before their evening even begins, the long reach of the mob interrupts their solitude promising that no good deed will go unpunished. Vowing to get even for the couple’s interference at the Tawnee Mountain Resort, the perpetrators of both plots take aim at Katie and Casey. As they dodge Mafia hitmen with the aid of a mysterious caller, Katie and Casey fight for their lives when Revenge Comes Calling. (Source) 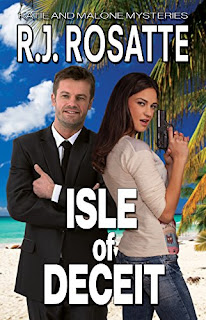 Katie Douglas and Casey Malone, having survived revenge attacks from the Mafia and a scheming financier, are rewarded for thwarting plots aimed at guests of the famed Tawnee Mountain Resort. Billionaire owner Raymond Elliot has sent them on an all-expense-paid, month-long vacation to his private-island retreat in the Bahamas. But the couple, who are just beginning to enjoy their budding romance, finds it hard to relax in the tropical paradise when bodies keep washing up on the shore. Even more perplexing, the islanders won’t talk about the strange goings-on that Katie and Casey encounter.
When they discover that the supervisor of the work crew assigned to build a private airstrip on the island has secret activities that he is willing to do anything to hide, they find themselves targets once more. They seek to solve the mysterious deaths and get to the bottom of who Jake Peters really is and why this beautiful piece of heaven has become an Isle of Deceit. (Source)

Since these are novella length, R.J. is able to pack a lot of action into a fairly short amount of reading time. Katie and Casey go through quite a bit in these two stories, and yet they managed to maintain senses of humor throughout, while also getting to know each other better. You could definitely say they have an odd dating history.

Where to find R.J. Online: 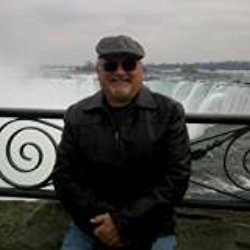 A native of Prince Edward County, Ontario, his careers have included being an infantry officer in the Canadian Army Reserves, economics teacher at Loyalist College in Belleville, Ontario, a long-haul truck driver and businessman.
He has travelled all forty-eight lower US states, eight Canadian provinces, Italy, Mexico and most of the Caribbean. He currently resides in Bayside, Quinte West, Ontario with his wife, Wendy, and their Westie, Molly. (Source)

A Footstep Echo by J.D. Sanderson

On Episode 101 of the GSMC Book Review Podcast I chatted with J.D. Sanderson about his debut novel A Footstep Echo. I mention in the episode that I haven't always been a fan of reading science fiction even though I've always loved watching it. One more reason for me to love hosting this podcast is that it's giving me the opportunity to read books I might not otherwise. A Footstep Echo is another example of that, and I'm so glad I read it! 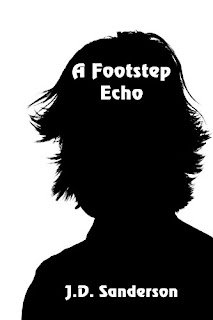 
Who is the Mystery Girl? Bernard Abbey’s life was routine, stagnant, and lonely. That all changed the day she entered his life. To save him from being killed, a mysterious young woman transports Bernard to another point in time. As he comes to grips with what has happened, Bernard realizes his new friend is unable to speak. She cannot tell him who she is, where she came from, or how she can travel through time. Even worse, she’s unable to tell him what is chasing her. As she takes him back and forth in time, they cross paths with strangers who claim to know his new friend, each with a different story of her origin. The only thing he knows for certain is that the fate of humanity’s idyllic future is somehow connected with his new companion. (Source)

So, it's both Science Fiction AND time travel. Two things I really enjoy (even though I can easily get bogged down in the details and confuse myself...especially with time travel). What you don't get from the description is that Bernard is not your typical science fiction main character. J.D. doesn't specify his age, but Bernard is retired and not exactly a spring chicken. That doesn't stop him from embarking on quite the adventure with Mystery Girl. For the record, we do learn Mystery Girl's identity, but you'll have to read the book to find out what it is.

J.D. Sanderson lives with his wife, daughter, and mini poodle in South Dakota. A lifelong fan of science fiction, J.D. has been writing professionally in one form or another for seven years. When he's not writing, you'll find him enjoying his favorite sci-fi movies and shows with his family or walking his dog. (Source)

Are you a fan of sci fi and time travel? Want to read Bernard's story and find out what happens to Mystery Girl? Enter our giveaway for a chance to win a copy of A Footstep Echo by J.D. Sanderson! Entering is easy: go to one of our social media pages and comment on the post for this episode (Episode 101). That's it! Just go  to Facebook, Twitter, or Instagram, and comment on the post for Episode 101: Interview with J.D. Sanderson! You have until September 1 to enter, and winners will be announced on September 3. Good luck!
To hear the interview with J.D. please click here.
Posted by GSMC Book Review Podcast at 7:03 PM No comments:

Reasons to celebrate: First, this was the 100th episode of the GSMC Book Review Podcast! Second, Kellye Garrett returned to the podcast! If you are a regular listener, you will remember Kellye from her first episode back in September of 2017 when she joined me to talk about her debut novel, Hollywood Homicide. She returned this time to talk about her follow-up book, Hollywood Ending. 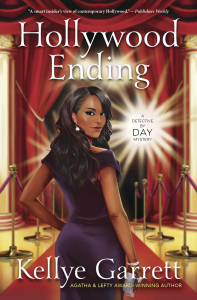 Tinseltown's awards season is in full swing, and everyone is obsessed with dressing up, scoring free swag, and getting invited to the biggest awards shows of the year. But when celebrity publicist Lyla Davis is killed, the festive mood comes to an abrupt halt.
Apprentice private eye Dayna Anderson thinks she's uncovered the killer. Unfortunately, what starts as an open-and-shut case turns out to be anything but. Diving deeper into the investigation, Dayna gets a backstage look at gossip blogging, Hollywood royalty, and one of entertainment's most respected awards shows—all while trying to avoid her own Hollywood ending. (Source)

I love this series. Dayna is hilarious, likeable, and relatable, and Kellye's writing is engaging and fun. The book is part mystery (could even be considered a cozy mystery), part beach read, and all enjoyable.   If you like mysteries but like them on the lighter side (you know, without the gory details or the scare-the-pants-off-of-you moments) then this is a series you should definitely check out.

What I enjoyed:
Quotes:
Where to find Kellye online:
Author Bio: 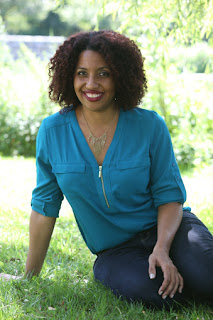 Kellye Garrett's first novel, Hollywood Homicide, won the Agatha, Lefty and Ippy awards for best first novel. It was also nominated for a Barry award. Hollywood Ending, her second book in the Detective by Day series, will be out on August 8, 2018. In addition to writing, she currently serves on the national Board of Directors of Sisters in Crime as its Publicity Liaison.
Kellye previously spent 8 years working in Hollywood, including a stint writing for the CBS drama Cold Case. People were always surprised to learn what she did for a living--probably because she seemed way too happy to be brainstorming ways to murder people. A former magazine editor, Kellye holds a B.S. in magazine writing from Florida A&M and an MFA in screenwriting from USC's famed film school. Having moved back to her native New Jersey, she spends her mornings commuting to Manhattan for her job at a leading media company--while still happily brainstorming ways to commit murder. (Source)

Intrigued by Dayna and her crime-solving adventures? Then enter our giveaway for a chance to win a copy of Hollywood Ending by Kellye Garrett! Entering is easy-peasy: go to one of our social media pages and comment on the post for this episode (Episode 100). That's it! Just go  to Facebook, Twitter, or Instagram, and comment on the post for Episode 100: Interview with Kellye Garrett! You have until August 25th to enter, and winners will be announced on August 27th. Good luck!
Posted by GSMC Book Review Podcast at 7:37 PM No comments: