Over the weekend I had the pleasure of welcoming author Jasmine Silvera back to the GSMC Book Review Podcast for Episode 80 (astute readers might be wondering what happened to Episode 79? Never fear! That's the link for that episode, it just happens to be a non-interview episode). Jasmine was one of my first guests on the podcast; the first time was almost a year ago when we talked about her debut novel, Death's Dancer, on Episode 17. She came back this time to talk about the second book in her Grace Bloods series, Dancer's Flame. 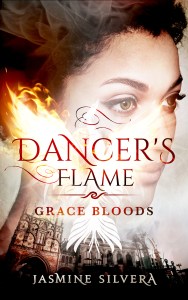 With the help of a god, Azrael and Isela exposed a conspiracy within and altered the world’s balance of power. But for Azrael, victory comes with dangerous new powers he can't control. Will accepting his future mean losing everything he’s gained — his allies, his territory, and his consort?
Isela’s found a home when she stepped into Azrael’s protection, and his arms. But if accepting her new role as consort means giving up the life she’s worked for will the price be too high?
When an impossible creature shows up in Prague bearing a dire warning, the search for answers divides them. Now Isela must forge a bond with the power within her while Azrael fights to keep from tearing himself apart. And time is running out. Gods don’t forget or forgive, especially a betrayal from one of their own. (Source)

Dancer's Flame picks up where Death's Dancer left off. I don't want to give too much away from the first book if you haven't read it, but part of the arc of this second book is watching Azrael's and Isela's relationship continue, and evolve, after the happily ever after of that first book. We also learn more about Azrael's cohort and Isela's family. 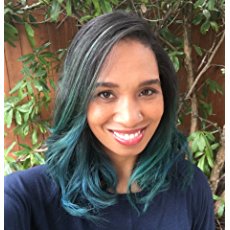 Jasmine Silvera has loved reading and telling stories about imaginary worlds for as long as she can remember. She acquired a love of sci-fi, fantasy, and comic books from her dad, who thought the Hobbit was a perfectly acceptable bedtime story for a ten-year-old. She filled long hours as a volunteer at the church thrift store by reading boxes of donated Harlequins.
In college she published short stories and essays before earning a degree in Broadcast Journalism. In 2012, Jasmine quit her day job in web production to walk the Camino de Santiago and focus on her writing.
Inspired by and written during her two years living in Prague, her first published book, Death’s Dancer, was released on December 27, 2016 by Kindle Press. It was selected as part of the Kindle Scout Program.
She lives in the Pacific Northwest with her husband and their small, opinionated human charge. (Source)

Do you want to get involved in the world of the Grace Bloods and read Dancer's Flame? Today is your lucky day because we have a giveaway! Jasmine has been kind enough to provide 3 copies of Dancer's Flame and one of them could be yours! All you have to do is go to either our Facebook, Twitter, or Instagram pages and comment on the post with Jasmine's interview. It's as simple as that: just comment on Episode 80 on Facebook, Twitter, or Instagram, and you'll automatically be entered to win Dancer's Flame! The last day to enter is May 19th and winners will be announced on May 21st.