Fade Out and Deadly Misfire by Laurie Fagen

Episode 78 of the GSMC Book Review Podcast features an interview with Laurie Fagen. Laurie is the author of the Behind the Mic series, as well as being a contributor to the Tawnee Mountain Mysteries. Laurie has led quite the interesting life (just take a peek at her bio below) and is now channeling her experiences into writing. She was such fun to talk to; I hope you'll enjoy the interview and check out her books! 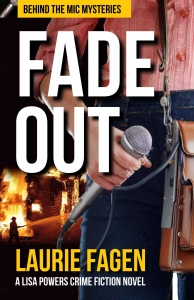 A young radio reporter, Lisa Powers, covers the crime beat for her Chandler, AZ station. She helps the police department solve cold cases, and for fun, she writes and produces a mystery theatre podcast.
In Fade Out, book #1 in the “Behind the Mic Mysteries,” Lisa investigates the arson death of a prominent socialite, but finds herself threatened by a woman with a deadly knife; she helps a bereaved family look for a missing man; and in her “Murder in the Air Mystery Theatre” podcast, the “Frightful Fun House” isn’t so fun anymore when a young couple gets trapped inside with a dead body. (Source) 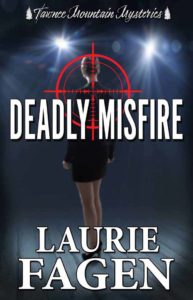 KWLF-FM crime reporter Lisa Powers’ boss sends her to a radio news conference in New Jersey, in the dead of winter, and far away from her beloved crime beat in Arizona. She goes to the Tawnee Mountain Resort begrudgingly, afraid she’s going to miss a big story.
But at the convention, where she is up for an excellence in reporting award, an unknown stalker torments her for several days. When she takes the stage to learn the winner, the stalker antes up the stakes – with deadly force. (Source)

Lisa is a crime reporter, helps the police department solve cold cases, and writes and performs a mystery podcast. You might say she has a singular focus when it comes to her interests. This focus, though, makes her very good at her job and very effective at her work helping with the cold cases. She's young and a little over-eager sometimes, which gets her into situations she probably could avoid if she wasn't such a go-getter.

I read, and Laurie and I talked about, the 2 books described above, but there is also a prequel and a 2nd book in the Behind the Mic series. Deadly Misfire is part of the Tawnee Mountain Mysteries, so can probably be read as a stand-alone novella, but it does fit into Lisa's story as part of the series, and comes chronologically after the second book. 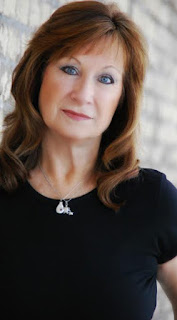 Laurie Fagen is a long-time “writer by habit,” who has written for commercial and cable television, commercial radio, corporate video, magazines, newspapers and is now delving into the world of crime fiction.
While she was getting her bachelor’s degree in radio and television at Arizona State University, she worked for KTAR Newsradio in Phoenix, providing live traffic reports from a single-engine aircraft above the city. After graduation, she worked as an assistant producer with Preston Westmoreland, booking guests for his talk show, while continuing to report on Valley traffic.
Television called, and Fagen returned to her home state of Iowa to work as a reporter/photographer for KWWL-TV, an NBC affiliate in Waterloo. She initially covered the state capital, then later landed the crime beat, covering the Waterloo Police Department, Black Hawk County Sheriff’s Department and Courts. She was also an anchor and editor in addition to her reporting and videographer duties.
Remembering why she left Iowa in the first place, Fagen returned to the Valley of the Sun to work for the City of Phoenix Public Information Office. Finding a video camera in another department, she lead the city’s efforts in creating internal employee training and other video programs, and later founded The Phoenix Channel, the City’s government access cable television station. She created, wrote, produced and anchored a number of the shows that still exist today, discovering that there is life after television news.
Fagen started her first business, Word Painting, as a writer, producer and director for corporate video, which led to a 13-year career providing marketing, sales, training, informational and other types of video programming for businesses. She also wrote magazine articles, a Fiesta Bowl parade script, murder mystery plays, two documentaries and other projects that included for KAET-TV, KPNX-TV, Phoenix Suns, Educational Management Group, Randy Murray Productions, and more. She was an adjunct professor at Scottsdale Community College, teaching a corporate video class.
She started her second business, Fagen Designs, as a fiber and jewelry artist, just before she and her late husband, Geoffrey Hancock, purchased a community newspaper in Southern Chandler. The couple published the Ocotillo News, which was later renamed SanTan Sun News, for 13 years. Under their ownership, the paper grew from 16-20 pages with a circulation of about 7,000 to an average of 80 pages twice a month with more than 38,000 printed.

At the same time she was overseeing the news division for the SanTan Sun News, she and a business partner operated a contemporary art gallery in downtown Chandler, AZ, called Art on Boston, for three years. The gallery also had studio spaces for artists to work in and provided art classes, until the economic downturn of 2010, but she continues to promote fine art and fine artists on her Art Online AZ Facebook page.  She is also a jazz singer around the Valley as Laurie Fagen & Friends.
Fagen and Hancock continued the newspaper operation until Hancock’s death in 2013, at which point she sold the paper to a local publishing company.
Organizations she has been involved with include three chapters of Women in Communications, and she was president of the Phoenix chapter; she was co-founder of the former Arizona Film, Theatre & Television, which later merged with two other similar groups to become Arizona Production Association, of which she was the second president; Arizona Quilters Guild, where she handled publicity duties; and she was the 2014 president of Sisters in Crime Desert Sleuths chapter in Phoenix.
Fagen has short stories published in the past three Desert Sleuths’ anthologies, and is an Alfred Hitchcock Mystery Magazine honorable mention winner.
Fagen has published Fade Out, the first in a series of crime fiction novels with a young radio reporter protagonist who covers the crime beat, helps police solve cold cases and for fun, writes and produces a mystery theatre podcast. It’s available in e-book, print and audiobook. Book #2 in the series, Dead Air, is available in e-book, print and audiobook. Equalizer, a prequel novella to Fade Out, is also now available in ebook only. Fagen is writing book #3, Bleeder,  as well as Deadly Misfire,  part of a multi-author series called “Tawnee Mountain Mysteries,” to be released in spring 2018. (Source)

Do you love mysteries, cold cases, and podcasts? Would you like to read Fade Out? Perfect, because we have a giveaway! Laurie has been kind enough to provide a paperback, an e-book, and an audiobook of Fade Out and one of them could be yours! All you have to do is go to either our Facebook, Twitter, or Instagram pages and comment on the post with Laurie's interview. It's as simple as that: just comment on Episode 78 on Facebook, Twitter, or Instagram (and indicate which format you would like), and you'll automatically be entered to win Fade Out! The last day to enter is May 12th and winners will be announced on May 14th.