Populace by A M Wilson

A M Wilson was my guest for Episode 81 of the GSMC Book Review Podcast. A M joined me to talk about his debut novel, Populace, which is a dystopian, post-apocalyptic story set in the year 2151 after much of the US has been destroyed by a series of nuclear blasts. 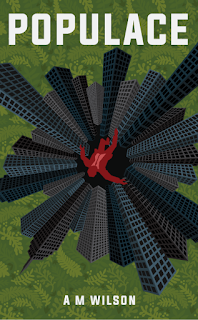 AMERICA 2151
NEW YORK. WASHINGTON. CHICAGO. LOS ANGELES. ALL WIPED OUT FROM NUCLEAR BLASTS.
The New United States of America is centered in Omaha, where the Leviathan Corporation provides a muted, controlled existence for its populace. Synthetic drugs keep them sane. The people are safe — for now — from the threats on the outside.
Summoned to the president’s office, unlikely hero Thomas Ignatius Stout receives an extraordinary mission: Hunt down and return, dead or alive, the vicious killer responsible for destroying the lives of millions and millions of Americans, Joe Ikowski, who remains a thorn in the government's side. Tom accepts his burden and leads an expedition past Omaha's protective barrier and into the great unknown.
That’s when Tom’s journey really begins.
Taking him from Kentucky to Arizona to Mexicali and the Rocky Mountains, Tom finds far more than he is searching for — and starts to learn the deeply complicated, disturbing truths of his own identity and a world in which he had only before scratched the surface.
In this poignant page-turner, a novel that blends elements of science fiction, political thrillers and an Orwellian-style future, rising novelist AM Wilson takes readers on a wild ride inside what could become the future of the United States, if we ruin ourselves from the inside. It’s a novel that will make you think, no matter what you think of America. (Source)

This particular genre isn't for everyone. If you're looking for pure escapism or a nice beach read, you might want to look elsewhere. But if you're looking for an incredibly well written, thoughtful, and somewhat frightening book, you should definitely check out Populace. It's somewhat frightening because it could so easily be true. It reminded me a lot of the dystopian novels I read in High School English, and A M says he was influenced by Brave New World for the concept of this book. To be honest, this isn't my go-to genre, and it can sometimes take me awhile to get into this type of story, but A M's writing is great and the story definitely sucked me in once it got going. I needed to know what the heck was going on and what was going to happen to Tom.

There's no truth here. I'm not a preacher, and I'd fail at being an idol. I've loved telling stories since I couldn't see over a kitchen counter but would watch my grandmother craft pie crust through the nook in her arm. I've always loved humor — humor that challenges our worldview, humor that gets us through hard times, humor that makes us realize our own humanity. And my burden is simple: I believe everything is possible.
I'm from Flint, Mich., originally, but I've moved around a lot -- to Indiana, Illinois, Kentucky, Missouri, California, Spain and Argentina. I've been a journalist, a farmer, a groundskeeper, a librarian, a fast-food worker, a bagboy, a political organizer and a shill.
I've loved and lost then loved again.
Who am I? I'm AM Wilson; I'm wide awake, it's morning. And as Bob Dylan said, "I am a farmer. And whoever heard of a fatalistic farmer?"

Intrigued by Populace? Good news, it's giveaway time! A M has been kind enough to provide 3 copies of Populace and one of them could be yours! All you have to do is go to either our Facebook, Twitter, or Instagram pages and comment on the post with A M's interview. It's as simple as that: just comment on Episode 81 on Facebook, Twitter, or Instagram, and you'll automatically be entered to win Populace! The last day to enter is May 19th and winners will be announced on May 21st.


To hear the interview with A M, please click here.
Posted by GSMC Book Review Podcast at 9:00 AM